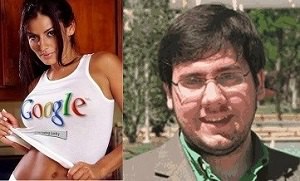 4 October 2014, Nicholas Rotundo a Google employee was arrested by the FBI for cyberstalking a female University of Texas Dallas undergrad and was indicted on two accounts of felony cyberstalking and one account of felony computer intrusion. If found guilty he faces up to 10 years in prison.

Nicholas Rotundo 23 years of age from San Jose was employed by Google at Google’s Mountain View Campus as an internal technology resident.

Rotundo allegedly convinced a University of Texas Dallas undergrad that had signed up for scientific studies that he was a legitimate researcher conducting a study on “breast perception” that “involved the public’s perception of different breast types”. The gullible and stupid undergrad actually believed Rotundo’s extremely strange story, and she went ahead and sent Rotundo naked pictures of herself in exchange for a whopping $8,500 (talk about quick, easy cash) believing her boobs and naked body was now part of “boob research”.

Rotundo allegedly harassed the student for 15 months. What seems strange is she tolerated the email harassment for so long, even sending naked photos of herself and accepting bucks before coming forward in January this year.

The Cyberstalking started in June 2013. The first email inviting her to join a research study on different breast types, the e-mail address came from breastperceptionstudy@gmail.com.

Rotundo at that stage had not yet been identified by her as a Google employee. He asked her to submit four naked photographs in return she would receive $4,500. She declined and never sent the naked images. Two weeks later she received another email this time offering $6,000. On Dec. 19, a third e-mail arrived offering $8,500. This time the temptation was too great (playing hard to get paid off and she got her price) the greed for American dollars resulting in her sending the four $8,500 naked photos.

And now it gets interesting.

The images she sent Rotundo in December seemed to have had an effect on him, making his manhood roar like the great African lion after a lioness on heat.

In my eyes she had enticed him and led him on by sending him those photos of her breasts.

Firstly, what kind of a person would electronically transfer naked images to someone they’ve never met? Breast research is done behind closed doors with strict privacy contracts.

26 Jan she received another message from a different e-mail, widgerword@gmail.com, which was associated with the name John Smarting. This message stated that the sender had stumbled across naked photos of her and would make sure that nobody else finds them.

In exchange, he requested several more naked photos more explicit than breasts, and he wanted a video. In the next week, he sent several more threatening e-mails.

It’s now that the Cyberstalker comes out within Rotundo, he was now roaring with lust, becoming greedy and wanting more than just breasts. He wanted it all. He had now turned into a mentally disturbed and outrageously weird Google psycho Cyberstalker, and there was no stopping his Cyber lust (that’s what he thought)

Nicholas Rotundo was unaware of signature tracking, and he left his IP footprint on both Cyberstalking email accounts and on his own email account.

The FBI requested internet protocol address activity associated with both Gmail accounts. The IP address matched both accounts, they then later traced that IP address to an internet account belonging to “Google Nick Rotundo”.

The FBI also accessed his e-mail accounts finding messages connecting him with the account, and found evidence of photos taken of two other women, without their knowledge, via web cameras on their laptops.

It seems he was also hacking and spying on people without there knowledge. 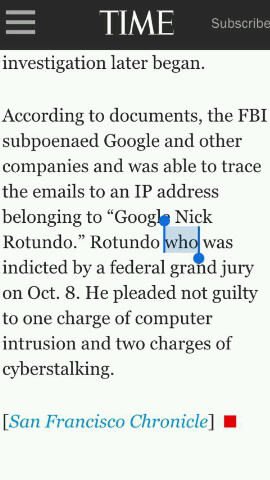 Nicholas Rotundo's Time.Com Tweets On TwitterTime.com had the following to say on Twitter while uploading an image with Nicholas Rotundo Cyber-stalking guilt plea. He pleaded not guilty to one charge of computer intrusion and two charges of Cyberstalking.

Google has not yet responded, neither do we know if Rotunda still works for Google or if he’s been fired/dismissed or suspended.

Nicholas Rotundo was sentenced (Friday, February 12, 2016) to three and a half years in federal prison and must also register as a sex offender when he gets out.

Rotundo’s defence attorney, Philip Hayes had the following to say: