Web Designers and SEO Services are renown for pointing a link back to there website in the footer, not only for advertising purposes but also for PageRank 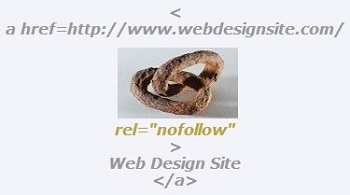 Web designers and SEO services are renown for pointing a link back to there website in the footer, not only for advertising purposes but also for PageRank, which we all know plays an important roll in ranking. PageRank has been one of the signals Google use to determine a site’s authority in the search results.

Due to PageRank been a crawling factor Webmasters went out on a quest of spamming backlinks in the hope of gaming the search results.

Hence, we have Google's Algorithms that filters out sites that use illicit backlink techniques, and at times the WebSpam Team will intervene, classifying the site as spam (the dreaded message in Google Search Console) The Unnatural Link Penalty will only be revoked once the links have been cleaned/removed and reconsideration is granted by a Google employee from the WebSpam Team.

The majority of web designers and SEO’s link “follow”, which then passes link juice (PageRank) to there site. If you use the rel=nofollow attribute Google will ignore the links. Hence, no link juice passed. A rel=nofollow link will however still function when clicked upon, it simply won’t carry link juice and rel=nofollow will prevent your site AND the site falling prey to one of Google's Algorithms.

Follow links in the footer, and in general, all links should be editorial links by Webmasters and should not be forced links that are part of web design template or SEO package.

John Muller, distinguished Google employee had the following to say about web designers that force follow links in the footer.

If it has a nofollow then it doesn’t pass PageRank and we wouldn’t have to worry about what you are linking to, whereas, if it doesn’t have a nofollow and it looks like it is essentially something the web design agency placed there themselves and it’s not an editorial link by that individual website then that’s something that the Manual WebSpam team could be kind of unhappy about.


It’s standard practice these days for SEO and Web Design companies to include a follow footer link as part of there service. Google will class those links as paid and unnatural. What would make it worst is if the Web Designer or SEO company links back to your site with a follow link. That would be classed as an exchanged link (you link to me, I link to you) excessive cross-linking in the eyes of the WebSpam Team is unnatural.

Essentially, if you’re dropping links in other people’s websites and you’re using those to forward PageRank to your website then that’s kind of an unnatural link… If you’re doing this for your clients then at the very least they need to be aware of this and they need to see this as something that they’re willingly placing there. So, instead of hiding it in the footer or obscuring it in some way on the sites that’s something I’d make as clear as possible and if you’re using this as a way to advertise your web design or your SEO company, then using a nofollowed link is just fine because it lets people click on that link, go to your website, see your services and make a qualified decision about your website… for advertising purposes then putting a nofollow on that link makes it just as valuable in the sense that users are still able to find your website and to see your services there.


Google has on many occasions stated that advertising links need to be 'nofollow'. If you feel there is a slight chance of Google misinterpreting the link, it’s best to nofollow rather than to take chances.

Branded anchor text can be used in the footer as long as it’s not spam. The text needs to be associated with your brand (your company name) and should not target your main keywords.

In general, if you’re linking things like your brand name then that’s generally fine. That’s a good way to kind of link to your website. That’s usually not something you’d need to add a nofollow to. On the other hand if your branded anchor text is something like “Cheap Web Hosting Seattle” or something like that then that starts to look a little bit manipulative, so that’s something where you might want to use a nofollow.


Then John speaks about exchanged links

If this is something that is provided in exchange for maybe a lower cost hosting, then that could be considered an exchanged link and an unnatural link. Its something the WebSpam Team might take action on. If you’ve just been adding these links across the board for all these websites and essentially this is not something that the Webmaster naturally places on their website then that could be problematic in the same sense that if these are PageRank passing links then that PageRank might be seen as kind of passing unnaturally. If you do that and you have a nofollow attached to the link then that’s absolutely no problem…

So, really making sure its something where when someone from the WebSpam Team looks at that then we say, “OK, its clear that the Webmaster wanted this link there on their own and they’re OK with this link being there so that this is visible as a natural link on those pages”


All along John has been referring to paid, forced and keyword rich links. Google will only take action on footer links if they target keywords and if they perceive the links to be paid for or part of a package deal, or forced upon the Webmaster. The WebSpam Team would use their own discretion when determining whether the link has been placed naturally or unnatural. If they detect that all your backlinks or the majority of them come from footers they will perceive those links as being a requirement and part of your package.

Web designers and SEO’s expecting a link in the footer as part of there services is unnatural and would be classed as paid.

You yourself could imagine if your site had 10 000 pages. The Web Design company would have 10 000 links pointing back to them, all 10 000 carrying link juice and passing PageRank. That’s not natural, it’s UNNATURAL.

Consider this. The Web Designer designs 10 000 sites that each have 100 pages, they would then have a million backlinks all carrying link juice! Talk about unnatural. But if they had a million links pointing to them in editorials due to the immense amount of people talking about them, it would be classed as natural.

Always remembering, the dreaded unnatural link penalty comes in two forms, inbound and outbound. This means your site and your Web Designers site could both be penalized if Google thinks those links are part of a package deal between you and your Web Designer. A follow link that is part of a Web Design or SEO package (forced link) is classed as PAID or ADVERTISING, it’s an unnatural link.

You can, however (which I suggest) write an editorial about your Web Design company, crediting them for the 'Happy Flashy' site they created. The editorial link can be follow and will be classed as natural. But all the other links in your footer need to be nofollow.

And if you still insist on follow footer links, at least use branded anchor text or even the URL. Don’t use keyword rich anchor text.

I also believe that bigger brands stand less chance of been penalized than smaller brands due to there authority. In the past, John Mueller has admitted that the WebSpam over-look and simply ignore certain sites that they perceive to be 'OK sites' and don’t take action. Your site, on the other hand, could be perceived to be 'NOT OK'.